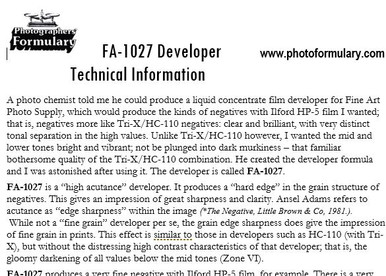 FA-1027 is a highly concentrated, high-acutance film developer, that performs beautifully with all black and white films. It is a liquid which dilutes either 1:9 or 1:14. Among its characteristics are: the ability to produce an optimum negative with any black and white film, whether standard, random grain as found in HP-5, FP-4, Pan F, Tri-X, etc, or fabricated T-Grain films such as Ilford Delta 100, Kodak T-Max, Agfa Acros. You get the same, full information negative, only the development times change. The grain is very fine, but also very sharp. There is no soft grain fuzziness that is apparent from low activity, sulfite action, fine grain developers like D-23, D-25, Microdol-X, etc. There is no developing action on unexposed silver which creates excess fog you have to print through (as with DD-X), which can be troublesome in printing. Printing times with FA-1027 require half the exposure time they do with Ilfotec DD-X. FA-1027 maintains a precise balance between Phenidone and the developing agent Hydroquinone. It also utilizes 2 restrainers, Potassium Bromide and Benzatriazole. This accounts for it's remarkable performance. Ansel Adams, in The Negative, refers to acutance as edge sharpness. My HP-5 negatives developed in FA-1027 resemble the clear, crisply defined Tri-X / HC-110 negatives I was so used to; without the high contrast effect. Prints made from FA-1027 negatives show broad distinct breaks of tone in all areas. There is none of the D-76-like high value compression, and no loss of density in Zones VI and below as with HC-110 (the HC in HC-110 stands for high contrast). Negatives are optimum: high in local contrast, low in overall contrast, with very high acutance. Plus and minus development with FA-1027 will also yield superior negatives. The same distinct breaks of tone are in evidence, with the contrast either raised or lowered. With other developers, you'll get an overall gain or loss in density with only a slight contrast change.