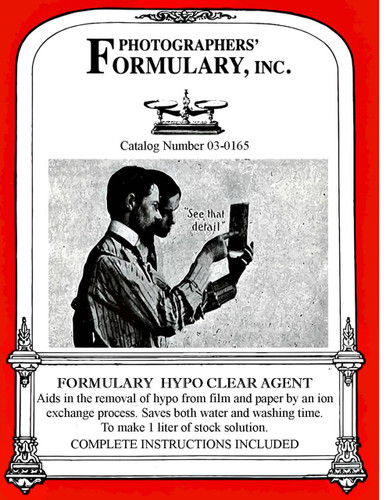 Formulary's Hype Clear Agent aids in the archival process, based upon ion exchange: ions absorbed onto a solid film or paper can be replaced by ions of a solution such as those found in the Hypo Clear solution. The net effect is that the absorbed thiosulfate ions of the hypo (difficult to remove by a water wash) are replaced by sulfite ions (readily removed by a water wash). Hypo Clear does not decrease the total number of ions absorbed on the paper, it merely exchanges those ions originally on the film or paper with those of Hypo Clear. Washing after the use of Hypo Clear is imperative. The chemicals in this kit are used to make the stock solution which is diluted 1:9 to make the working solution.

This product hasn't received any reviews yet. Be the first to review this product!